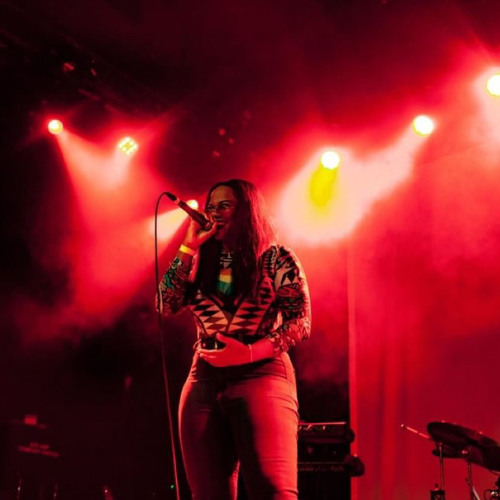 In this episode Red Shaydez talks about:

-Her introduction to hip hop & influences

-Her studies at FSU

-Her work at The Hip Hop Transformation Program

-Her past work as a Flight Attendant & Radio Host

-Her connection with MC Lyte

-Her recent releases and more…

Red Shaydez is a multi-faceted Hip Hop recording artist born in Boston, MA who comes from a northern, southern and West-Indian background. She spent every summer in Macon, Georgia as a child and even lived there for a short while. Red was able to intertwine various cultures into her music style. Beginning her music career professionally as an artist and online radio personality on BlogTalk Radio (Red Shaydez At The Hour), she was able to learn a lot about the music industry.

She was recently featured on the “New Artist” segment on DJ Lord Sear’s Show on Sirius XM’s Shade45 discussing her new release “Little Sabrina” that has a powerful message for all the young girls in the world. This visual has recently gone viral on various outlets.

Red Shaydez got nominated for “Best Female Rapper of the Year” in 2015 at the Underground Music Awards in NYC. Just year later in 2016, she became a mentor and adviser at The Hip Hop Transformation (a youth program in Cambridge, MA). She plans to become even more involved in her community in the coming months.

Later that year, she released her debut album “Magnetic Aura” that has received rave reviews. Red Shaydez’s manager, OZ Abraham, happened to be stopping by a local smoke shop Seymore Green when he heard “Serena Williams” by Red Shaydez being played in the store. They came into contact and the rest was history. Since then, “Serena Williams” has been receiving a lot of press and recognition. This record has been featured in an indie film “NYGTV: The Movie” and spun on various radio stations. This single even garnered her more attention from a local filmmaker from Emerson who decided to film a documentary “She Got Bars” about her craft as well as her journey thus far.

Red Shaydez has also been featured on many notable sites such as Thisis50.com, HipHopWeekly.com, and SOHH.com. You can follow Red Shaydez @Redshaydez1 on ALL social media and you can stream her music on Spotify, iTunes, and on her own Pandora radio station.